Aaand part 4 of my September Moderate Book Binge. You thought I’d forgotten? Well, I haven’t.
I picked this book up in Limerick, which is a store where I keep happening to buy good books I’d never heard of before. I bought Crimson Petal and the White there; so when I saw Under the Skin there (also written by the lovely Faber) I didn’t hesitate much before I bought it. Ask the Dust happened to be the book right next to Under the Skin; it’s written by John Fante. It starts with a 3-page introduction by Charles Bukowski about why this book is awesome, so I thought that was enough incentive to give it a go. (I’ve never read Bukowski, but I’ve had to treat enough book covers at the library to know he’s a bit of a big deal.) 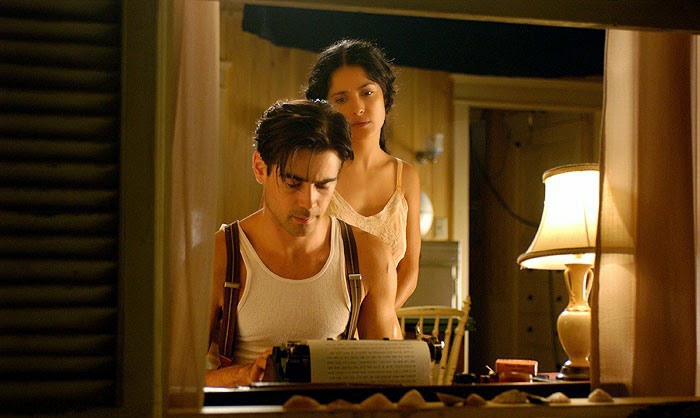 Ask the Dust is a story about Arturo Bandini, a struggling writer in Los Angeles. He is also the narrator of the story. Arturo’s quite an interesting character; he’s obviously a dreamer, because he often imagines what life is going to be like when he’s rich and famous. These thoughts seem to be more frequent when he’s bitter about other people. He also struggles with women and his understanding of them; he refuses a hooker who comes up to him, then follows her to her place as she takes another guy with her, he waits for her outside, and then when she finally takes him upstairs he flings money at her saying he only wants to talk.
You could describe him as a typical starving artist, but the way he shows you his life in LA is so confusing and weird, you start to feel for him. Even though he’s sometimes a really big creepy jackass. He’s an underdog who’s not an underdog at all; he’s hard to explain.

(Oh and apparently they made this book into a movie with Colin Farrell who is kinda cute. Win!)

Return of the King


The last part of my favourite trilogy, and also my favourite part of the trilogy.
Reading this book with my blog in mind, I tried to find a suitable subject to write about- and I just can’t find anything that sticks out. I feel like I need to talk about the battle of the Pelennor fields because I cry every time I read that damn chapter. And I want to talk about Sam and what kind of character he is because he’s so human, and I want to talk about the scouring of the Shire, and about Frodo’s burden, and about the Valar, because even they are in this story in small ways…

I could write about the relationship between Frodo and Sam; how Tolkien put his war experience in their story, how they have a commander-soldier relationship where one can’t go on without the other. But that’s been done a hundred times. I could write about why Frodo had to leave Middle-earth and write a whole article on his psychology, but I need at least two years at uni to fully explain it with the right words if I want to do it well.
Then I started writing about the effects of the events of the mission to destroy the ring on the four hobbits. But I just ended up with a really long description of events, and that couldn’t possibly be interesting to read, right?
… And just today I tried writing about why people on the internet are wrong when they say Tolkien was a fascist, a nazi, or a gender discriminator.

Truth is, I really can’t describe Return of the King. It’s just beyond my level of writing right now. And I might be having a cold and having a head that’s so stuffed that I feel like someone shoved a turkey baster up my nose whilst I was sleeping really isn’t helping with the writing. And I did try. I have five pages of useless drafts.

See it as a credit to this book. It is literally indescribably good. It’s the reason why I read the entire series every year- to end up snivelling and crying on the last page. (Sam’s last words. They are the best words ever written. And so normal. God damn it I feel like crying just thinking about it.) 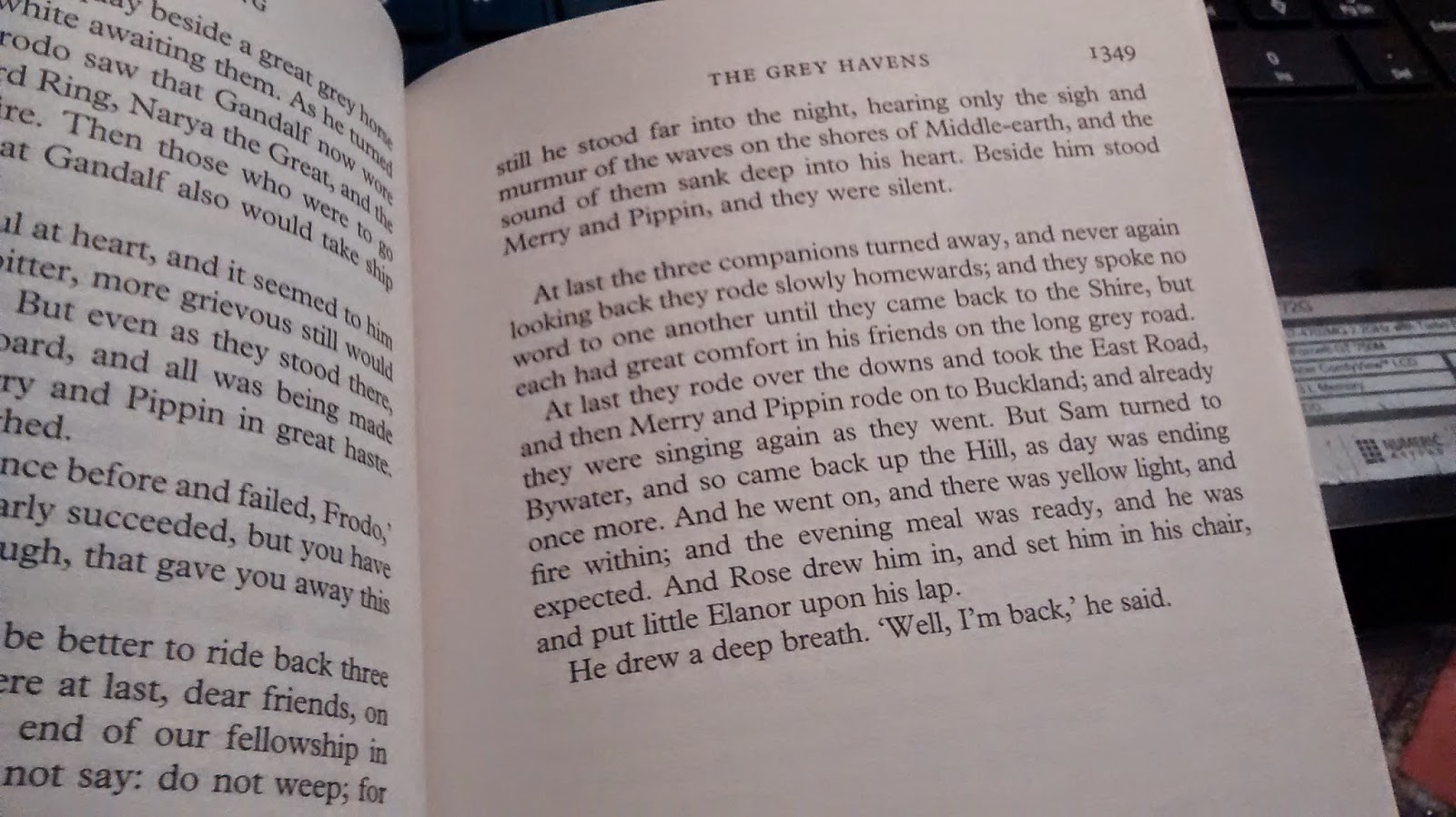 See it as a promise. If I do find a suitable subject related to Return of the King I will post it on this blog. But honestly, I’ve been trying for two weeks and nothing feels right.


About a week or two ago I was hanging out with a friend when she pulled a copy of Breakfast at Tiffany’s out of her backpack. Now, when people produce books from their bags my interest is always immediately piqued because I want to know what my friends read; and if they’d recommend it to me; or if I’ve read it. In this case I was surprised, because I had heard of the movie and the song, but I didn’t know it was first and foremost a novella by Truman Capote. Intrigued by this, and after reading a satisfying intro I jotted it down on The List*.
So when I saw a copy during my Christmas shopping (I have reasons for doing them in October!) I felt like I couldn’t let this opportunity pass me by. Also it was that or buying a super expensive but beautiful copy of Picture of Dorian Gray.

Breakfast at Tiffany’s is interesting. Like eating new food and not yet knowing if you like or dislike the new flavour- but I find that with these ‘acquired’ tastes, in authors and in food, are usually worth it if you persist. Having finished the novella and a few short stories that were included in my copy (House of Flowers, A Diamond Guitar and A Christmas Memory) I found myself as engrossed in his work as I was in McSweeney’s- which is my point of reference in short stories.
I could describe this ‘taste’ as new, but I thought this book was a bit like Catcher in the Rye, or at least it reminded me of the much-loved book I read when I was 16. Probably because of their descriptions of phonies. The only downside of reading this story was that I couldn’t get that damn song out of my head for two days.
Breakfast at Tiffany’s is a story told by a narrator whose name we never discover- but Holly calls him Fred. The book is his point of view and (admittedly quite neutral) opinions on Holly Golightly. Holly is a young woman who declares herself to be a free spirit. She doesn’t have a job and she hasn’t named her cat. She never unpacked her suitcases and seems to live on powder-room money and money a lawyer sends her for a weekly favour. She has admirers, yes, she seems to have dozens, and in a way our narrator is one of them. All she seems to want is to find a rich man to marry. And yet… she’s charming. She’s rude as hell, sure, but charming. You can’t not be as enticed as the narrator as she manoeuvres through life as a city celebrity.
If you saw the movie, you might remember the happy ending- it’s a bit different in the book. And honestly, I think I prefer the book. (Shocker.) 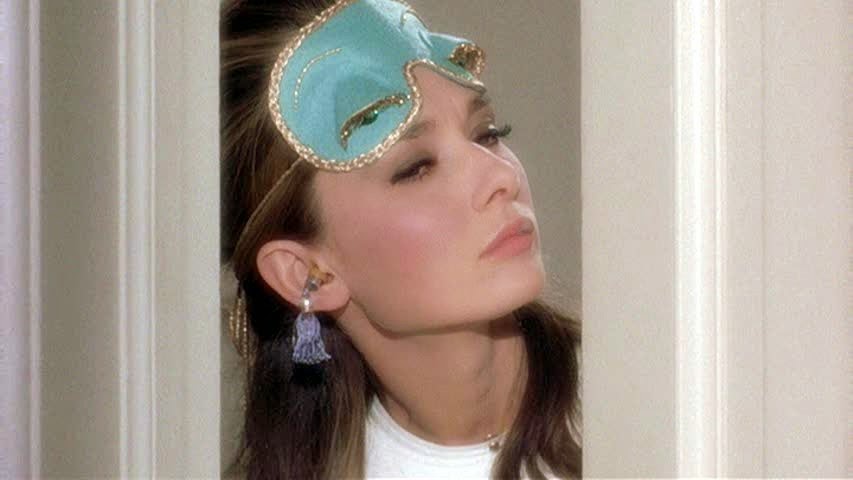 If you liked Catcher in the Rye, I think this might be something for you.

*at the moment The List has some of the following items:
-Jurassic Park (1 & 2)
- Wizard of Oz
- The Slow Regard of Silent Things (coming out soon)
- The Outsiders
-The Ocean at the End of the Lane
-more Discworld
- Picture of Dorian Gray
-Horns
- Let’s Pretend This Never Happened
-…
Posted by Bejoes at 07:22 No comments: